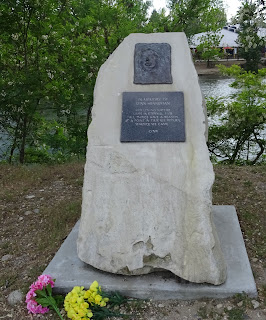 This bronze relief and stone memorial can be found along the Boise River near Main Street. It's a sad chapter in the city's history. Lynn Henneman was a Montana-based flight attendant who was staying in Boise one night before continuing her work assignments. She went for a walk along the Boise River and disappeared. Her body was found in the river about two weeks later. She had been murdered. Erick Hall was later convicted of murdering Lynn and another woman. He is on death row.
Posted by Debbie Courson Smith at 2:24 PM