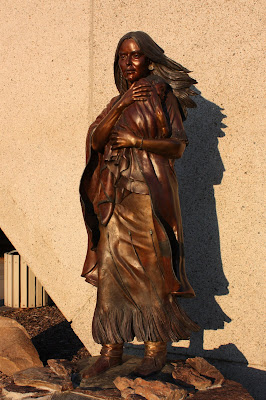 This Sacagawea bronze statue is outside the Boise Historical Museum. Sometimes, her name is spelled Sacajawea - but the "g" spelling is now mainly used because it reflects the pronunciation as noted by Lewis and Clark. Her story is well-known. She was born in Idaho, a member of the Shoshone tribe, and later kidnapped by another tribe. She was "sold" to a French fur trader who claimed her as one of his wives. The baby she's carrying was known as "pomp" on the expedition. She and her husband's knowledge of native languages helped the expedition, and her presence let tribes know early on that the expedition was not a move of war. Children are often told she was an Indian Princess.

Posted by Debbie Courson Smith at 12:05 AM