Welcome to Boise from I-84 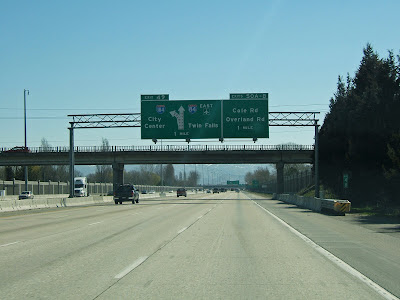 I don't drive on the I-84 highway very often, it's big through Boise until right after Overland, then it "skinnies" to two lanes in both directions - although they're going to expand it soon. This is approaching from the west. Traffic moves fast (for me) on the interstate. The speed limit is 65, so drivers cruise closer to 75 if traffic isn't heavy. If that overpass wasn't "in the way," you'd see the mountains again, kinda. We had warmer temperatures, so the haze I have mentioned in other posts appeared. The mountain views became more blurry throughout the day.
Posted by Debbie Courson Smith at 8:16 AM