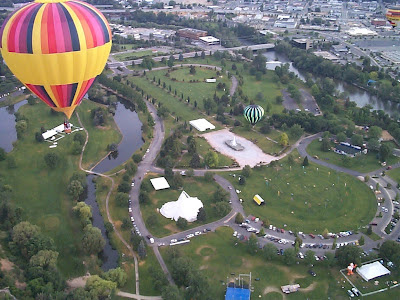 I have another photo from my archives to share today, as the rain and cold continue to keep me home. This is a picture of Ann Morrison Park taken from an hot air balloon. My husband took this picture when he got a ride during the balloon festival. We used to have big celebrations of the Boise River, which runs through town, and hot air balloons - festivals that didn't make any money so they're gone. The park is named after the wife of Harry Morrison, founder of Morrison Knudsen. It's 145 acres, has a very large, unique fountain in the middle and a play area for kids along the Boise River - which is on the right side. The water on the left is mostly for ducks, and the ducks love attention and free food. There are tennis courts, disc golf, volleyball courts - and the Greenbelt pathway runs through it all along the river. This is our favorite park. My daughter calls it "The Downtown Park" - even though Boise has several just-as-large downtown parks.
Posted by Debbie Courson Smith at 7:13 AM